Guide To What’s Inside

Suppose you traveled in the Balkans and Macedonia. In that case, you probably already know of the wonders of Ohrid Lake, the most touristy lake resort town in Macedonia – but you’ve probably never heard about Ohrid’s younger cousin, Dojran Lake.

You won’t find much information about it online. Still, if you’re one of the rare people that visit this hidden gem, you’ll understand why it’s one of the most underrated summer destinations on the Balkan Peninsula.

A Brief History Of Dojran 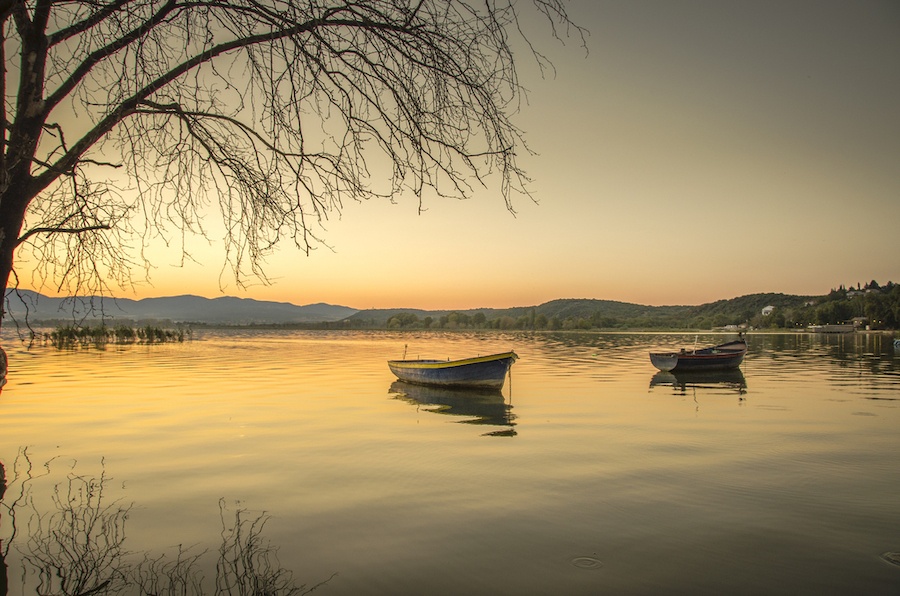 Dojran is a small town in the Southeastern part of Macedonia located on the shore of the smallest natural lake in Macedonia – Dojran Lake.

Like most Macedonian cities, Dojran has its own legend. This one says that once upon a time, a girl named Dojrana was forced to marry a Turkish officer who fell in love with her during the early Ottoman occupation. The girl, however, was not interested in this and decided to take her own life by jumping into the stream where she used to fill water. After this, the stream expanded so much, it flooded the area and turned into a lake.

The lake and the town that appeared next to it were subsequently named after the girl. Today, there’s a statue of Dojrana in the city center.

In the past, the city had close to 30,000 inhabitants, but the city suffered greatly during the Balkan Wars and WW1, and most of the permanent residents never came back. Today, the town is divided into two parts- Old Dojran and New Dojran and is home to around 5,000 inhabitants but gets a lot more tourists in the summer.

Along the Dojran coastline, there are more than 50 hotels, resorts, and other accommodation facilities. The city is slowly turning into a tremendous regional tourist hub that keeps attracting tourists from neighboring Greece, Bulgaria, and Serbia every summer.

If you’re visiting Dojran, you’ll likely be staying in Star Dojran, where most of the city’s tourist facilities are located. The best way to get around Star Dojran is on foot. The town is rather small and has a pedestrian promenade of around 5 kilometers that stretches all the way to the Greece border.

Alternatively, you can rent a bicycle or motorbike (your hotel or room host can help you with this). However, if you’re planning to visit Nov Dojran or take day trips to neighbor Strumica, Belasica Mountain, or the Smolari Falls, it’s probably a good idea to rent a car.

If you’re visiting from Skopje, three buses go to Dojran every day during the summer months. The journey takes 3-4 hours, and a return ticket costs 750 MKD (12.5 euros).

The Weather In Dojran 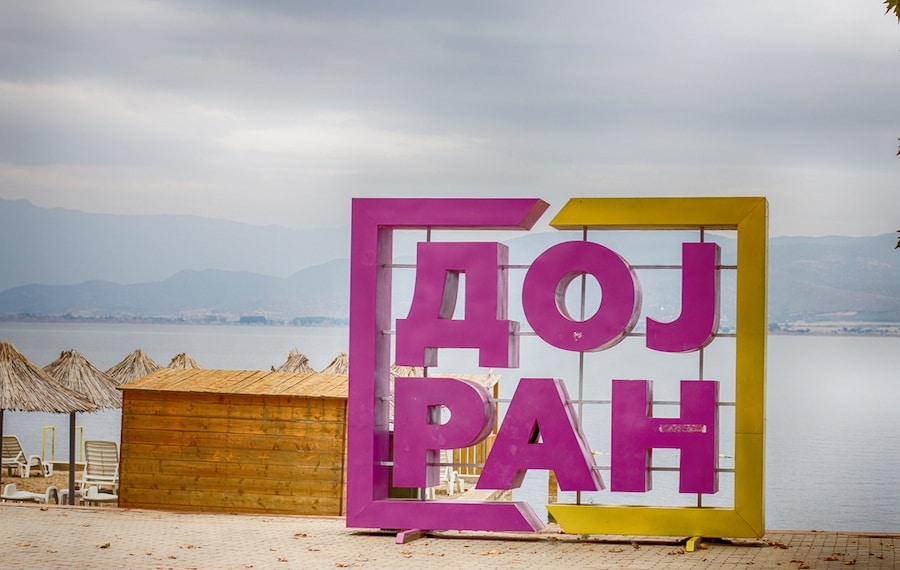 The weather in Dojran is a bit different than the rest of the country, probably because mountains surround the lake from the northern, western, and eastern sides. On the south, there’s a valley that connects Dojran to the cities of Thessaloniki and Vergina.

Hence, it’s no surprise that in this part of Macedonia, you can feel the Mediterranean vibe with hot and dry summers and mild and wet winters. This is the main reason why Dojran has an abundance of endemic algal species, flora, and fauna that’s not characteristic of other parts of the country (more about it below).

What To Do At Dojran Lake 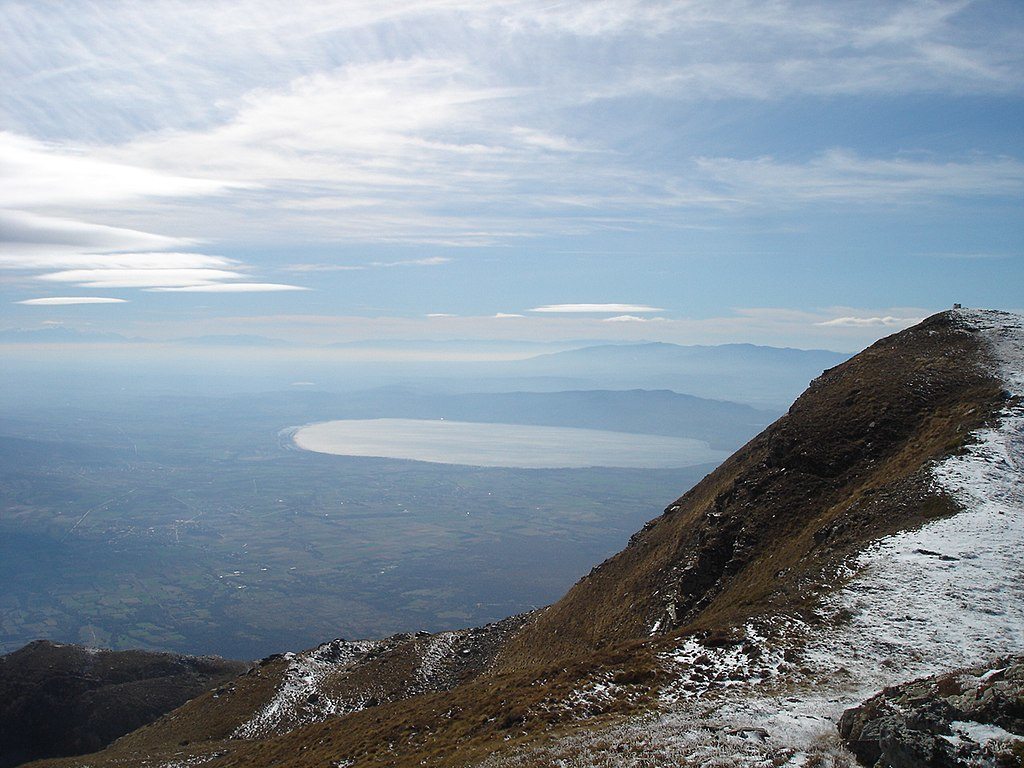 Without a doubt, the main attraction in the city of Dojran is Dojran Lake. It’s the smallest natural lake in the country, covering an area of 43 square kilometers and a maximum depth of 10 meters.

If we consider the lake’s size, it’s definitely one of the richest (in life) lakes in Europe. There are 15 different fish species, and the main reason for this is the high natural concentration of phytoplankton and zooplankton that allows all fish inhabiting the lake to thrive. Hence, it’s no wonder that Dojran is famous for…

Try A Spot Of Fishing At Dojran Lake

Dojran Lake has always been a home to an unusually high number of different fish species, and fishing is traditionally the main occupation in Dojran.

Today, Dojran is one of the last remaining places on earth where a traditional way of fishing with cormorant birds’ assistance is practiced. Many local fishermen build feeding grounds for the birds on the like, which causes the birds to fly over these areas of the lake, making the fish run away in the opposite direction, straight towards the fishermen’s nets.

Some of the most prominent fish species that inhabit Dojran lake are the European perch, trout, carp, sheath fish, eel, and claw fish.

Enjoy Delicacies From The Lake

The locals in Dojran say that to taste good, a fish needs to swim three times – in the water, in a pan of oil, and in wine with your meal.

And for a town with such a rich fishing tradition, it’s no surprise that Dojran’s fish dishes are well known in the region. The most famous dish is rudd fish on a reed, prepared by wrapping the reed around the fish and placing it on the grill.

The reed protects the fish from burning and gives it a very unique and distinguishing aroma that will make you feel hungry as soon as you feel the smell.

Swim At The Dojran Beaches 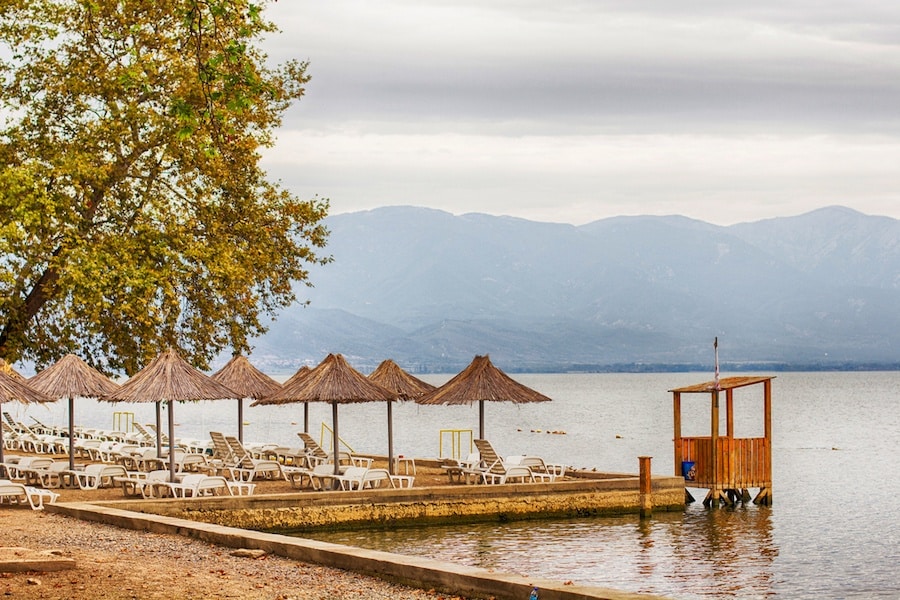 In total, there are six beaches on the Macedonian side of the lake. Three of them are located in New Dojran, and three in Old Dojran.

The beaches in New Dojran are mainly reserved for the locals because they’re a bit off the beaten track and hence, don’t have many tourist facilities. One of them – Nikolich Beach, is located on the border with Greece on the northern tip of the Dojran Lake.

The most beautiful and busiest beaches are located in Old Dojran, with the most famous one being the City Beach, located next to the walking street.

This beach is divided into several private beaches, and there are many bars, restaurants, and a few private pools on the shore.

The other two beaches are reserved for the guests of the two summer camps- Partizan and Autocamp ARM, with the latter being located on the border with Greece on the southern tip of the Dojran Lake.

As previously mentioned, Lake Dojran has an abundance of endemic algal species. Some of these emit iodine, which makes them an excellent natural remedy for treating an array of different diseases, including rheumatism, skin conditions, and a range of respiratory diseases.  As a result, the number of tourists that visit Dojran for medical reasons keeps increasing every year.

What Else Can You See In Dojran

Not everything in Dojran revolves around the lake, and other sites are worth visiting. The first one that comes to mind is…

Built in the 14th century, the Old Clock Tower is the oldest remaining building in Dojran. The tower was erected after a Turkish military commander by the name of Evrenuz, who conquered the city in the 1360s.

If you want to visit the Clock Tower, you have to climb to the top of Dojran Hill in Old Dojran. Once upon a time, this was the principal, Old Bazar street in Dojran, that was filled with shops and restaurants. Today, the only remnant from this era is this partially ruined tower that was severely damaged during the Balkan Wars of the 20th century.

St. Ilija Church is the oldest remaining church in the region. It was built in 1874 and survived both World Wars and the Balkan Wars, but the scars of the wars are still visible in the church’s exterior.

Once upon a time, this was one of the largest churches in the region and was covered in impressive frescoes. Today, St. Ilija Church isn’t looking its best, but the local authorities are planning to restore the building over the next few years and returning it to its former glory.

Located 130 meters away from a wild, remote beach in the northern part of Dojran, the old Turkish Bath has been around for at least a few centuries, but no one knows exactly when it was built. The bath was active until 1916, when most Turkish people living in the region left. 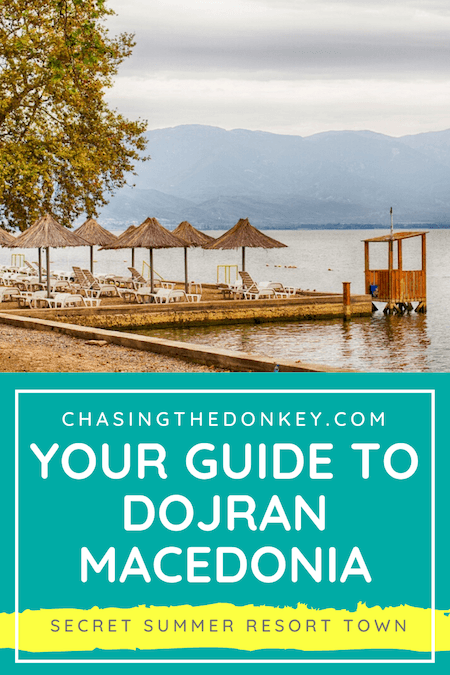 Take A Day Trip From Dojran

While you’re in Dojran, there are several different day trips you can take depending on your preference.

If you like trekking, you can climb Tumba Peak, the mountaintop that’s located on the border between Macedonia, Greece, and Bulgaria. If you want to get there, you have to drive from Dojran to Smolari, the village where the trail starts.

Alternatively, if you’re looking for something less challenging, consider visiting the Waterfalls in Smolari. It’s the highest waterfall in Macedonia and a beautiful hidden gem that you absolutely have to visit if you’re a nature lover.

Finally, while you’re at it, another place that deserves a day trip from Dojran is the city of Strumica, one of the most beautiful cities in the eastern part of Macedonia.

Did we miss something on this list? Let us know what else people can do in Dojran, and we’ll add it to the list!

Other Ideas For Exploring Macedonia