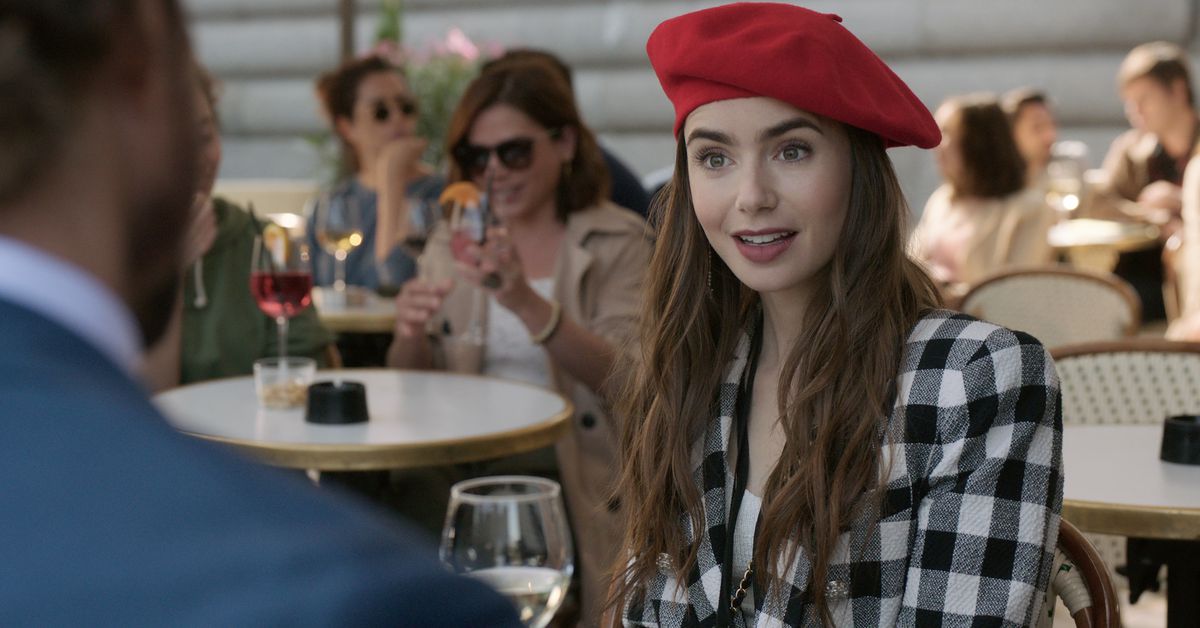 Democracy in the United States is either in its death throes or just a very painful midlife crisis. We’re a country led by a very sick, very silly old man. Meanwhile, a non-ideological virus is metastasizing thanks to ideological idiocy, and a fly is the star of the vice presidential debates since it is slightly more meme-able than systemic racism. Meanwhile, I’m trying to decide whether to pay for COBRA or child care. Recession turns deeper, expressions turn dire. Sartre looks like a Hallmark card. And amid all this chaos, more chaos: Netflix releases Emily in Paris.

What could have been, and should have been, a blissful escapist confection, the Darren Star — he of Sex in the City and Younger — production is instead a croissant of poop and pee that proves, as Sartre entitled his play, there is no exit. The remit of this review, like all Eater at the Movies, is how food plays into the show. In this case, all of Emily in Paris’s ineptitude can be refracted through the show’s boulangerie, brasserie, and bistro, which, like every other aspect of the city, is simplified into inane simulacra, a fetishized form whose richness and texture has been stripped away through Instagram filters and the willful trite presuppositions, not to mention arrogance and cupidity, of the titular character, Emily.

Though the series bursts with an admixture of Parisian errata and cliche, the first true food moment doesn’t pertain to Paris at all but to Chicago, the former home of Emily Cooper, the social media manager hero (with fewer than 50 Instagram followers?) who has left the Windy City for the City of Light. Upon meeting her boss’s boss at the Parisian marketing firm to which she has been assigned, the man says, apropos her home city, “I know Chicago. I’ve had the deep-dish pizza there.” Emily begins to say how proud Chicagoans are of it when he interrupts, “It was like a quiche made of cement.” To which Ms. Cooper replies, “You must have eaten at Lou Malnati’s.” There are literally endless fictional pizzerie to slag off. Combine any vowel-heavy chain of syllables and you have a mediocre joke that would land almost exactly the same. And yet, no, Emily in Paris chose Lou Malnati’s, a deep-dish institution in Chicago since 1971. Sure, it’s a chain, but a small one, and there might be (certainly is) better deep-dish pizza out there, but why pick on Lou? This isn’t David versus Goliath as much as Goliath flicking boogers on David, and to what end? In a bid for insider specificity, the series shat on a small business. And if the argument is made that any publicity is good publicity, that simply proves that the inherent ickiness of the character is, sad to say, true to life: that all we have is spectacle.

We are, I think, quite rightly in need of some sort of frothy fantasy. I mean, how many times can you refresh the New York Times or rewatch The Social Dilemma or listen to the next NPR Politics Podcast? But it is equally true that in times as trying as these, which are — and here is a truth out of which we can not wriggle — a consequence of our dysfunction, the hitherto benign escape routes we previously took reveal themselves as not quite as benign as we thought. Would Emily in Paris hit differently if it weren’t also true that we are watching in real time how social media has rendered reality subservient to our easily shared interpretations of it? I dunno, does smoking look so cool on film when your grandfather died of lung cancer? I think not. Despite the beauty Paris has to offer, the show is built on an ugly and insidious premise. Everything is content. Nothing is real unless extruded into a social media algorithm, ratified in its existence by the likes of others. There is no present. There is only post, and posting.

Almost countless times through the first three episodes, Emily and the other characters demonstrate a complete disregard for reality in preference for the platforms of social media (in the show, these posts float on screen, complete with followers and hashtags, like ethereal projections.) Paris isn’t Paris but, as Emily tells her Chicagoan boyfriend while Facetiming as she walks, “The entire city looks like Ratatouille.” Meaning that the character’s entire frame of reference is itself a cartoonish recreation, a copy of a copy of a copy.

In another instance Emily’s friend Mindy Chen, one of the very few people of color to make an appearance in this unrelentingly white show, says, “Have you ever had ris de veau?” to which Emily replies, “Why? What is that, rice with veal?” to which Mindy replies, “That’s what I thought too. I think it’s brains or balls, but it tastes like ass.” As a frequent and fervent eater of ass, I can say affirmatively this is not the case. Ris de veau, which are sweetbreads, are not brains, balls, nor ass, but the thymus. This isn’t Chef’s Table and we don’t need a slow-motion disquisition on it but, for the love of God, would it hurt to close the loop on that in some way so that the error, and yes, defamation of a protein doesn’t stand uncorrected? No, and the reason is that reality doesn’t matter.

Now, it should be mentioned that Emily’s paramour, Gabriel (Lucas Bravo), is a chef; in fact, he is the chef at the bistro at which the ris de veau conversation takes place. He is incredibly handsome. So handsome. Like if Armie Hammer procreated with one of the sturdier barricades in Les Mis — Gabriel would be the gorgeous offspring. I mean, even though I’m quite upset about this true excrescence while contemplating his torso and face, I’m filled with jouissance, with all its Barthesian overtones of orgasmic joy. And I guess the contemplation of his beauty has put me in a good mood too, because honestly the acting throughout the series is really strong and Paris’s beauty does emerge from the shitshow unscathed and even if the boulangerie are nothing but blank parodies of themselves and the scenes within them are riddled with continuity errors, to see such vast array of batards, baguettes, pains au chocolat, croissants, and brioche is enormously pleasurable. But anyway, as angelic as he is, Gabriel can’t save this carnival of fart smell.

Look, there is smart-dumb and dumb-dumb and the archetype of an ingenue American in Paris is well-trod territory both in the hands of Star himself (viz. the “An American Girl in Paris” episodes of Sex in the City) as well as by luminaries such as Godard in A Bout de Souffle. Sometimes a naif from the Midwest is a divine fool, recognizing truths unseen by those accustomed to them. But Emily in Paris is dumb-dumb. That is to say, the show is silly in ways that I can’t imagine they meant to be. Consider the croissant. At one point, as an indicator of Emily’s rapier wit, she takes a picture of a gaggle of French women, fresh from spinning, enjoying a post-workout smoke. “#Frenchworkout #Smokin’bodies” she writes in a judge-y Instagram caption. Unremarked upon is the fact that Emily, still clad in her running outfit (which reveals, it might be noted, a totes shredded six pack), is holding a croissant — which is totally fine, but an indulgence all the same. This falls into a pattern that presents paradoxes without comment and which seem sloppy rather than provocative. The most egregious example, I think, takes place at the bistro where, unbeknownst to Emily, her potential new boyfriend Gabriel works as head chef. In a trope as well done as a Shake Shack patty, she sends her steak back, complaining it is undercooked. This is then followed by a brief very American diatribe about how, in America, the customer is always right. Is she supposed to be ridiculous or relatable? At any rate, the steak is sent back to the kitchen and then presented almost immediately with the predictable reply that the meat is cooked as the meat should be cooked. Emily is on the edge of advocating for herself when she catches sight of Angel Gabriel and, in an act again of unremarked-upon deflation, quickly backtracks to say the steak is perfect as it is. What are we left with but an increasingly futile hope that this is all pretext for a massive late-season volta in which Emily, like Oedipus or Creon, realizes her shortcomings, gouges out her eyes, and exiles herself to the periphery? No, this fantasy holds as little promise in Emily in Paris as it does in Washington, D.C.

There’s an early scene when Emily first meets her new best friend, Mindy, who is working as an au pair despite (or in spite of) her familial wealth. In this scene, the pair are sitting in a Parisian park and Mindy’s charges, two towheaded French children, are playing by a fountain. Without asking, Emily snaps and shares a picture of the kid to her account @emilyinparis, demonstrating her growing habit of photographing and Instagramming people without their consent. In this instance, I got so mad I had to get up and do a lap around my living room. What irked me so much was that taking a picture, let alone sharing it, of minors is so fucked up and, as it happens, illegal according to France’s Penal Code (Sec 226.1) and yet here passes without mention as if it were de rigueur. The gesture takes something beautiful and alive and, with an unthinking sense of entitlement, pins it like a dead monarch for the display and edification of others, imprisoning it behind hashtag bars and digested in the maw of a rapacious feed. And this gesture, which is essentially one of disrespect, is at the heart of every line, in every bite of every morsel of every meal that is served in Emily in Paris. To see something you know is beautiful made to bow in order to enter through the narrow aperture of idiocy makes one lose one’s appetite. Sure, Paris is a city of lights, of beauty, of love and, yes, croissants. But the more you love Paris, which is to say, the more you love life, with all its complexity, nuance and agenda- and metric-defying splendour, the more you’ll find Emily in Paris unpalatable, if not downright degueulasse.

The freshest news from the food world every day

Joshua David Stein is the co-author of the forthcoming Nom Wah Tea Parlor and Il Buco Essentials: Stories & Recipes cookbooks and the memoir Notes from a Young Black Chef with Kwame Onwuachi. He is the author of the six children’s books, most recently The Invisible Alphabet, with illustrations by Ron Barrett. Follow him on Instagram at @joshuadavidstein.