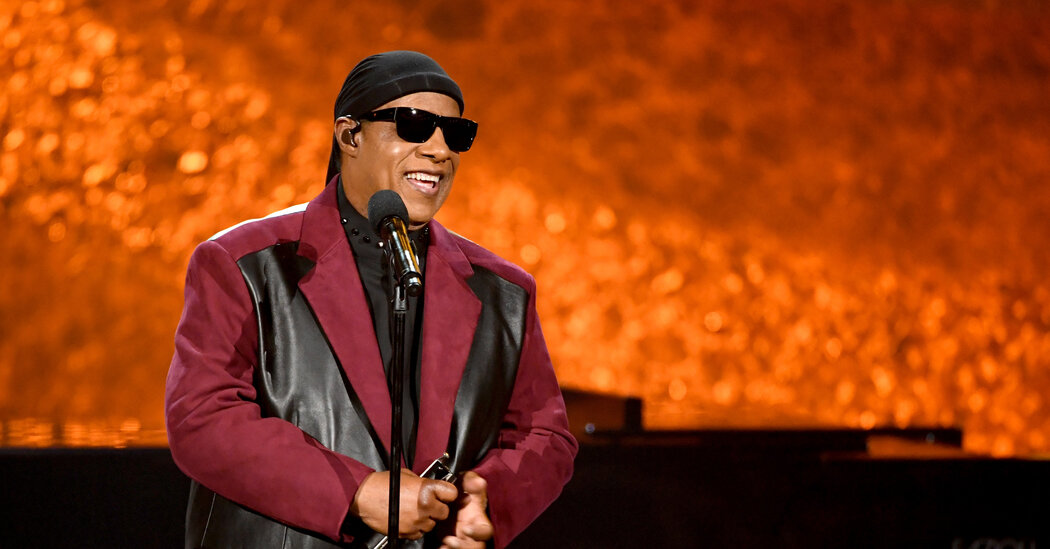 Every Friday, pop critics for The New York Times weigh in on the week’s most notable new songs and videos. Just want the music? Listen to the Playlist on Spotify here (or find our profile: nytimes). Like what you hear? Let us know at theplaylist@nytimes.com and sign up for our Louder newsletter, a once-a-week blast of our pop music coverage.

Stevie Wonder has lost patience with the lack of progress toward racial justice in America, and “Can’t Put It in the Hands of Fate” brings new specifics to the sentiments he sang about in “You Haven’t Done Nothin’” back in 1974. “You say you’re sick and tired of us protesting/I say, not tired enough to make a change,” Wonder sings. “You say just to hold on/I say no way.” Soon afterward, he lets loose a profanity. The beat is go-go, the tenacious, percussion-happy style from Washington, D.C., while Wonder’s perpetual tunefulness comes through in a jaunty harmonica lick and ever-climbing melodies. But he puts rappers upfront before he sings his first verse, and he fades out the song with a righteous chant: “Ain’t nobody got time to wait.” JON PARELES

It’s eerie to hear David Bowie singing “We can rise up from this grave” in “American Landfill,” which arrives suddenly on “The Turning: Kate’s Diary,” a spinoff EP from the soundtrack to “The Turning.” Bowie’s voice and imprint are heard throughout the song, which is a ferocious reworking of Kristeen Young’s “Saviour,” a duet with Bowie that she wrote and originally released in 2004 on her album, “Breasticles,” made with Bowie’s longtime producer, Tony Visconti. Radically reshaped now by Young and the producer Justin Raisen, it veers from jagged, dissonant verses — with electronic percussion and Young’s own dissonant piano — to heroic, glam-anthem choruses and a lofty, string-backed near-finale that comes crashing back down at the end. She’s less hopeful than ever that “You could be my saviour.” PARELES

In July 2016, Demi Lovato sang her brassy anthem “Confident” — a playlist staple at many a Hillary Clinton event, and a superior alternative to Rachel Platten’s “Fight Song” — on the opening night of the Democratic National Convention. Four years later, on the cusp of another election, Lovato has released a much more somber song for the occasion: the protest piano ballad “Commander in Chief,” which she debuted on Wednesday night during a performance at the Billboard Music Awards. Though she never mentions him by name, the song — with sparse production from Billie Eilish’s brother, Finneas — is a direct address to President Trump, delivered in a voice both quavering and undaunted. The song’s best moment is its sickest burn: “Won’t give up, stand our ground,” Lovato sings, “we’ll be in the streets while you’re bunkering down.” ZOLADZ

Lana Del Rey, ‘Let Me Love You Like a Woman’

Though Lana Del Rey has teased her forthcoming album, “Chemtrails Over the Country Club,” as an aesthetic departure — “it was like, ‘Is this the new folk? Oh, God, are we going country?’” she recently mused in Interview — the first song she’s released from it, “Let Me Love You Like a Woman,” is standard Lana fare. The piano-driven arrangement is muted and sparse, placing all the emphasis on Del Rey’s breathy, crooning romanticism (“Let me hold you like a baby”) and casual mass-cultural references (“Let me shine like a diamond,” “We could get lost in the purple rain.”) Perhaps, though, “Let Me Love You Like a Woman” is just the point of departure for “Chemtrails,” which she’s described as “Midwestern-sounding”; as she beckons in the verse, “I’m ready to leave L.A. and I want you to come.” ZOLADZ

“Before” is typical James Blake in some ways: alienated, muffled, troubled. “I must be in pain ’cause I’ve never needed anyone before,” he croons over a subdued four-on-the-floor. But the song is also unexpectedly mutable, as elements arrive to challenge his melody: a recurring beep, a looped voice saying “bounce.” And after three-and-a-half minutes, the song performs its own segue, heading for a more explicit dance beat and leaving Blake to harmonize the word “before” — though the music suggests, instead, something after. PARELES

The familiar elements of Tuareg electric guitar music, sometimes pitched to Americans as “desert blues,” are here: modal riffs and a kinetic six-beat, three-against-two pulse. But “Chismiten” — with lyrics chiding about the pointlessness of jealousy — supercharges those elements with guitar distortion, showy trills and an ever increasing sense of urgency translated into propulsion. PARELES

Made Kuti, ‘Free Your Mind’

Afrobeat, the protest funk that Fela Kuti forged in the late 1960s, is now in its third generation. Made Kuti is Fela’s grandson and the son of the Afrobeat bandleader Femi Kuti. Made Kuti is also a one-man studio band. He played every instrument on “Free Your Mind,” which merges the slow-simmering rhythm and implacable horn riffs of vintage Afrobeat with a looping, prismatic, multilayered production, doubling back toward psychedelia. PARELES

The rotating South African musical collective Spaza released its debut album last year, a misty concoction of rhythms, textures and voices that flowed through the ears like a sage brush hits the nose. The group is back with its second album, “Uprize!,” which it originally recorded as the soundtrack to a documentary on the 1976 student uprisings, by improvising along to the film’s rough cut. Spaza’s lineup here is different from the first album; this time the simmering voice of Nonku Phiri figures prominently, casually sliding into the center of the sound. It coexists there with the spoken testimonials of figures heard in the film, discussing the protests and the greater Black consciousness movement. On tracks like “Sizwile,” Phiri is bearing witness, singing underneath the elders’ voices rather than on top, fortifying their memory. RUSSONELLO

The New York-based singer-songwriter Julie Byrne has released two albums of searching, acoustic-guitar-driven folk, but adding her voice to an atmospheric 2016 track from the ambient artist Jefre Cantu-Ledesma suggests an intriguing new direction for her sound. Byrne recently found herself listening to Cantu-Ledesma’s original instrumental version of “Love’s Refrain” on long walks at dusk, inspiring her to write lyrics for it. The result is immersive and lush, recalling the hypnagogic pop of the early 2010s and the Lynchian dreamscapes of Julee Cruise. ZOLADZ

The latest offering from the Weather Station, the project helmed by Canadian artist Tamara Lindeman, is a creeping, powerful meditation on all sorts of systemic social ills. Moving away from the Joni Mitchell-inspired folk of her previous albums, she embraces a sound more akin to the spacious and vaguely uneasy compositions of Talk Talk, allowing her music to more effectively take up big, billowing questions. ZOLADZ

“Everybody knows my past now, like my house was always made of glass,” Justin Bieber sings on a raw, aching new song with the producer Benny Blanco, “Maybe that’s the price you pay for the money and fame at an early age.” Though Bieber’s spoken plenty about the toll his childhood stardom took on his mental health (most recently in the YouTube series “Justin Bieber: Seasons”), he’s never sung about it quite as candidly as he does here. “I’m so lonely,” he sings on the chorus, stretching that last word out into a broken yodel that conjures young Mason Ramsey in the aisles of Walmart. It’s a particularly loaded word for Bieber, though, given that one of his earliest hits — from the purple-hoodie era that the actor Jacob Tremblay so eerily conjures in the music video — promised “One Less Lonely Girl.” ZOLADZ

The isolation is palpable in “Alone” by the Chicago songwriter Bonzie, born Nina Ferraro. She picks recurring patterns on her guitar, overdubs her voice in ghostly unison and lets echoes float around her; halfway through, bass tones, deep drum impacts and wind-chime glissandos only amplify the scope of her solitude. The video matches her fingerpicked guitar to finger-painted images. PARELES

Shortly before releasing his new album, “Molecular,” the tenor saxophonist James Brandon Lewis put out two pieces of writing outlining a new artistic framework, called Molecular Systematic Music. The essays spill with savory ideas, but the big one seems to be that a musician should be trying to understand how their mind, body and environment give them a personal way of hearing the world — which replicates itself through the way they play, like musical DNA. There’s a counterintuitive pleasure to this: that the biggest and richest mystery is yourself, and that you’re the one who must crack that code. It feels apt coming from Lewis, whose saxophone playing has always sounded like a person trying to wrap his arms around a thunderstorm, as if he’s overwhelmed by the amount he has to say. On “Helix” his expert quartet — Aruán Ortiz on piano, Brad Jones on bass and Chad Taylor on drums — helps him turn those ideas into action. RUSSONELLO