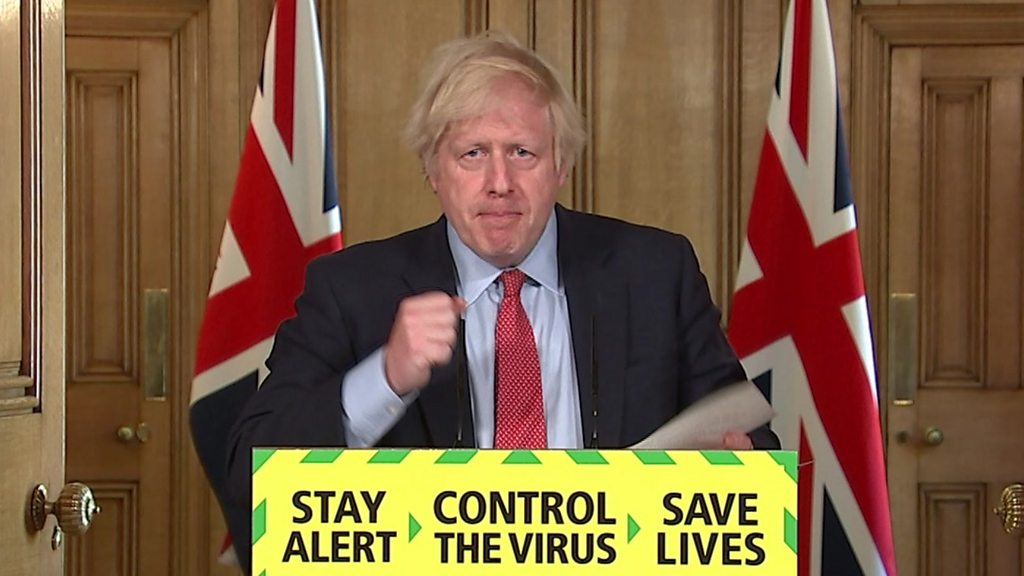 Groups of up to six people from different households will be able to meet outside in England from Monday, Prime Minister Boris Johnson announced.

They can meet in gardens – in addition to parks – as long as households keep two metres apart.

“These changes mean friends and family will start to meet loved ones,” in what would be a “long awaited and joyful moment,” he added.

The PM said it was possible because the government’s five tests were being met.

Currently, people in England can only meet one other person from another household at a distance in a public place.

Speaking at Thursday’s Downing Street briefing, Mr Johnson told people they should “try to avoid seeing people from too many households in quick succession” to help “avoid the risk of transmission from lots of different families”.

Barbecues will be allowed, the prime minister confirmed, providing people are “scrupulous” about washing their hands, maintaining good hygiene and social distancing.

He also insisted that the government does not want people to stay overnight at other households. “I’m afraid we’re not at that stage,” Mr Johnson said.

Labour leader Sir Keir Starmer said the party supports the gradual easing of some lockdown restrictions if it is safe.

In Scotland, people from two different households can meet outdoors at a distance from Friday – but First Minister Nicola Sturgeon said guests should not enter other people’s homes, for instance to use the toilet.

In Wales, people from two different households will be able to meet outside from Monday.

And in Northern Ireland, outdoor weddings with 10 people present may be allowed from 8 June.

Prof Chris Whitty, the UK government’s chief medical adviser, told the briefing it was “essential” that people continue to social distance and wash their hands.

“If someone was to go into the loo because they had to do that, it’s absolutely critical that they wipe everything down, wash their hands all the way through”, he said.

“If you were to do something like a barbecue, remember that passing things from one person to another, if you haven’t washed your hands, you can pass the virus that way.”

Mr Johnson said that, despite the slight relaxation of rules on meeting people outside, those in England deemed most vulnerable to Covid-19 should continue to shield themselves for now.

He told those who are shielding that ministers were “looking carefully at how we can make your life easier” and hope to “say more on that soon”.

The prime minister warned “there will be further local outbreaks” and said the government would reintroduce measures where required, but pledged people who lose income as a result of local lockdowns “will be helped”.

Speaking after the briefing, Labour leader Sir Keir said: “We support the gradual easing of restrictions on lockdown, it’s got to be safe and we need clear guidance from public health and we also need to see the scientific evidence actually published.

The PM warned the country should make only “limited and cautious” progress out of lockdown, which has been in place since 23 March.

Sir Patrick said the rate of infection was “close to one” – the rate at which the number of new cases can rise rapidly – and that “we are still seeing new infections every day at quite a significant rate”.

“That means there is not a lot of room to do things and things need to be done cautiously, step-by-step and monitored and the test and trace system needs to be effective in order to manage that,” he said.

His warning came as a new study by the Office for National Statistics suggested one in 15 people in England (about 7%) have already had the virus.

What are the five tests for easing lockdown?

After Easter, the government set out five conditions for easing lockdown measures safely.

The prime minister has said that – as of 28 May – these are being met sufficiently to slightly ease restrictions in England.

1. Making sure the NHS can cope – Mr Johnson said this test was met because there were only 475 hospital admissions in England on 26 May

2. A ‘sustained and consistent’ fall in the daily death rate – deaths have been falling since the middle of April, with 377 reported on Thursday, meeting this test, he said

3. Rate of infection decreasing to ‘manageable levels’ – with an average of 2,312 new cases being confirmed in the last seven days, Mr Johnson said this test was met

4. Ensuring supply of tests and PPE can meet future demand – test capacity was at 161,214 a day and new contracts for protective equipment had been signed, the prime minister said

5. Being confident any changes would not risk a second peak that would overwhelm the NHS – Mr Johnson said the adjustments were “carefully designed” to keep the R number (the average number of people each infected person passes the disease to) below one

In a separate move on Thursday, the government told dental practices in England they can reopen from Monday, if they put in place appropriate safety measures.

Nurseries and schools – for Reception, Year 1 and Year 6 classes – in England will also be able to reopen from next week.

Outdoor markets and car showrooms will also be able to reopen from Monday. They will be followed by non-essential retailers from 15 June if the five tests continue to be met, the PM said.

On Wednesday, Mr Johnson told MPs that he hoped to reduce the length of the two metre social distancing measures “as we make progress in getting the virus down”.

The World Health Organization says that a distance of one metre is safe, while other countries suggest 1.5m or 1.8m.

But Prof Whitty said the UK’s advice would not be changing, adding that staying a metre away was “somewhere between 10 and 30 times more risky than at two metres”.

Meanwhile, a further 377 people have died with coronavirus across all settings in the UK, according to daily figures released on Thursday.

The total number of deaths in and outside of hospitals is now 37,837, the Department of Health said.

Will Indonesia Edge Its Way into the Space Race?