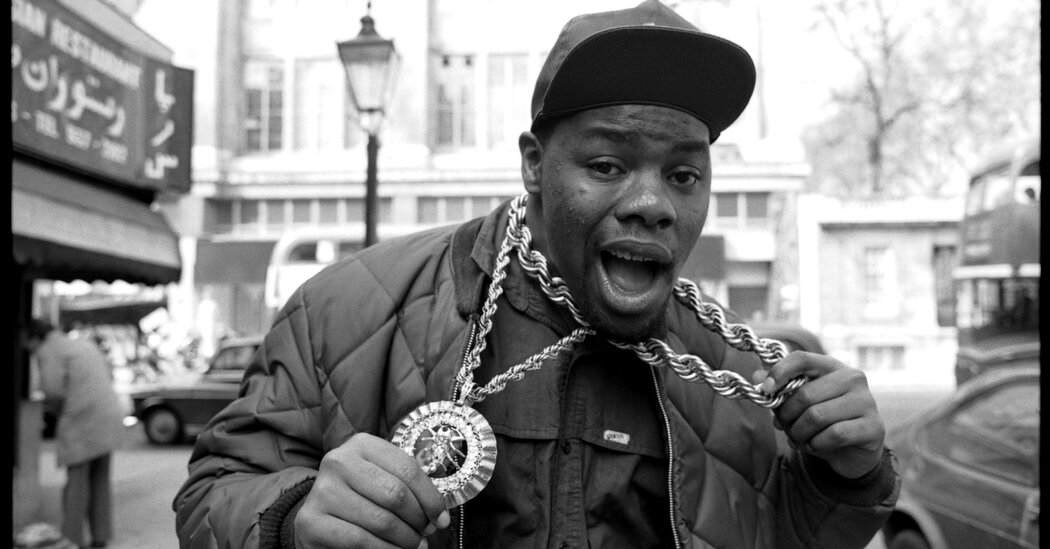 An innovative yet proudly goofy rapper, he had an unlikely crossover hit with a tune that led one critic to call him (favorably) “the father of modern bad singing.”

Biz Markie, the innovative yet proudly goofy rapper, D.J. and producer whose self-deprecating lyrics and off-key wail on songs like “Just a Friend” earned him the nickname Clown Prince of Hip-Hop, died on Friday. He was 57.

His death was confirmed by his manager, Jenni Izumi, who did not specify the cause or say where he died.

He had been diagnosed with Type 2 diabetes in his late 40s and said that he lost 140 pounds in the years that followed. “I wanted to live,” he told ABC News in 2014.

A native New Yorker and an early collaborator with hip-hop trailblazers like Marley Marl, Roxanne Shanté and Big Daddy Kane, Biz Markie began as a teenage beatboxer and freestyle rapper. He eventually made a name for himself as the resident court jester of the Queensbridge-based collective the Juice Crew and its Cold Chillin’ label, under the tutelage of the influential radio D.J. Mr. Magic.

On “Goin’ Off” (1988), his debut album, Biz Markie introduced himself as a bumbling upstart with a juvenile sense of humor — the opening track, “Pickin’ Boogers,” was about exactly that — but his charm and his skills were undeniable, making him a plausible sell to an increasingly rap-curious crossover audience.

With direct, often mundane lyrics written in part by his childhood friend Big Daddy Kane, Biz Markie was a hip-hop Everyman whose chief love was music, a journey he broke down over a James Brown sample on his first hip-hop hit, the biographical “Vapors”; Snoop Doggy Dogg later adapted the song for his own 1997 version.

“When I was a teenager, I wanted to be down/With a lot of MC-D.J.-ing crews in town,” Biz Markie rapped. “So in school on Noble Street, I say, ‘Can I be down, champ’/They said no, and treated me like a wet food stamp.”

But Biz Markie soon outpaced his peers commercially, becoming a pop sensation with the unlikely 1989 smash “Just a Friend,” from “The Biz Never Sleeps,” which was released by Cold Chillin’ and Warner Bros. Over a plunked piano beat, borrowing its melody from the 1968 song “(You) Got What I Need,” recorded by Freddie Scott and written by Kenny Gamble and Leon Huff, Biz Markie raps an extended tale about being unlucky in love.

Writing in The New York Times, the critic Kelefa Sanneh called Biz Markie “the father of modern bad singing” and wrote, “His bellowed plea — wildly out of tune, and totally unforgettable — sounded like something concocted after a day of romantic disappointments and a night of heavy drinking.”

Biz Markie has said he was never supposed to be the vocalist handling those notes. “I asked people to sing the part, and nobody showed up at the studio,” he explained later, “so I did it myself.”

“Just a Friend” would go platinum, reaching No. 5 on Billboard’s Hot Rap Singles chart and No. 9 on the all-genre Hot 100. He said he realized how big it had gotten “when Howard Stern and Frankie Crocker and all the white stations around the country started playing it.” And although Biz Markie would never again reach the heights of “Just a Friend” — he failed to land another single on the Hot 100 — he brushed off those who referred to him dismissively as a one-hit wonder.

Marcel Theo Hall was born April 8, 1964, in Harlem. He was raised on Long Island, where he was known around the neighborhood as Markie, and he took his original stage name, Bizzy B Markie, from the first hip-hop tape he ever heard in the late 1970s, by the L Brothers, featuring Busy Bee Starski. Always known as a prankster, he was said to have once given his high school vice principal a cake laced with laxatives.

He honed his act as a D.J. and beatboxer at Manhattan nightclubs like the Roxy, although his rhyming remained a source of insecurity. By the mid-1980s, he had fallen in with the Juice Crew, whose members began featuring him on records and eventually working with him on his lyrics and delivery.

“When I felt that I was good enough, I went to Marley Marl’s house and sat on his stoop every day until he noticed me, and that’s how I got my start,” he said.

In 1986, Biz Markie appeared on one of his earliest records, “The Def Fresh Crew” by Roxanne Shanté, providing exaggerated mouth-based percussion. That same year, he released an EP produced by Marley Marl, “Make the Music With Your Mouth, Biz,” calling himself the Inhuman Orchestra.

“When you hear me do it, you will be shocked and amazed,” he rapped on the title track, which would also serve as a single from “Goin’ Off,” his official debut. “It’s the brand-new thing they call the human beatbox craze.”

But after the success of his first two albums, Biz Markie’s third would become a part of hip-hop history for nonmusical reasons, which would nonetheless reverberate through the genre: a copyright lawsuit.

After the release of that album, “I Need a Haircut,” in 1991, Biz Markie and his label were sued by representatives for the Irish singer-songwriter Gilbert O’Sullivan, who said eight bars of his 1972 hit “Alone Again (Naturally)” were sampled without permission on Biz Markie’s “Alone Again.” A lawyer for Mr. O’Sullivan called sampling “a euphemism in the music industry for what anyone else would call pickpocketing”; a judge agreed, calling for $ 250,000 in damages and barring further distribution of the album.

That ruling would help set a precedent in the music industry by requiring that even small chunks of sampled music — a cornerstone of hip-hop aesthetics and studio production — must be approved in advance. A market for sampling clearance took hold, which remains a key part of the economics behind hip-hop.

“Because of the Biz Markie ruling,” one record executive said at the time, “we had to make sure we had written clearance on everything beforehand.”

In 1993, Biz Markie responded with a pointed new album, “All Samples Cleared!” But his popularity had waned, and it would be his last release for a major label. A decade later, he returned with “Weekend Warrior” (2003), his fifth and final album, though he maintained cultural relevance as a big personality with an enduring smash in “Just a Friend.”

Survivors include his wife, Tara Hall. Complete information on survivors was not immediately available.

Biz Markie made appearances on the big and small screens, usually as a version of himself. He was seen in the movie “Men in Black II,” heard as a voice on “SpongeBob SquarePants,” and appeared on “Black-ish” and as the beatboxing pro behind “Biz’s Beat of the Day” on the children’s show “Yo Gabba Gabba!” He also became a dedicated collector of rare records and toys, including Beanie Babies, Barbies and television action figures.

But even as a novelty throwback presence, he remained jovial, calling himself “one of them unsung heroes” and comparing himself to a McRib sandwich (“when I do pop up they appreciate everything they see”) in a 2019 Washington Post interview.